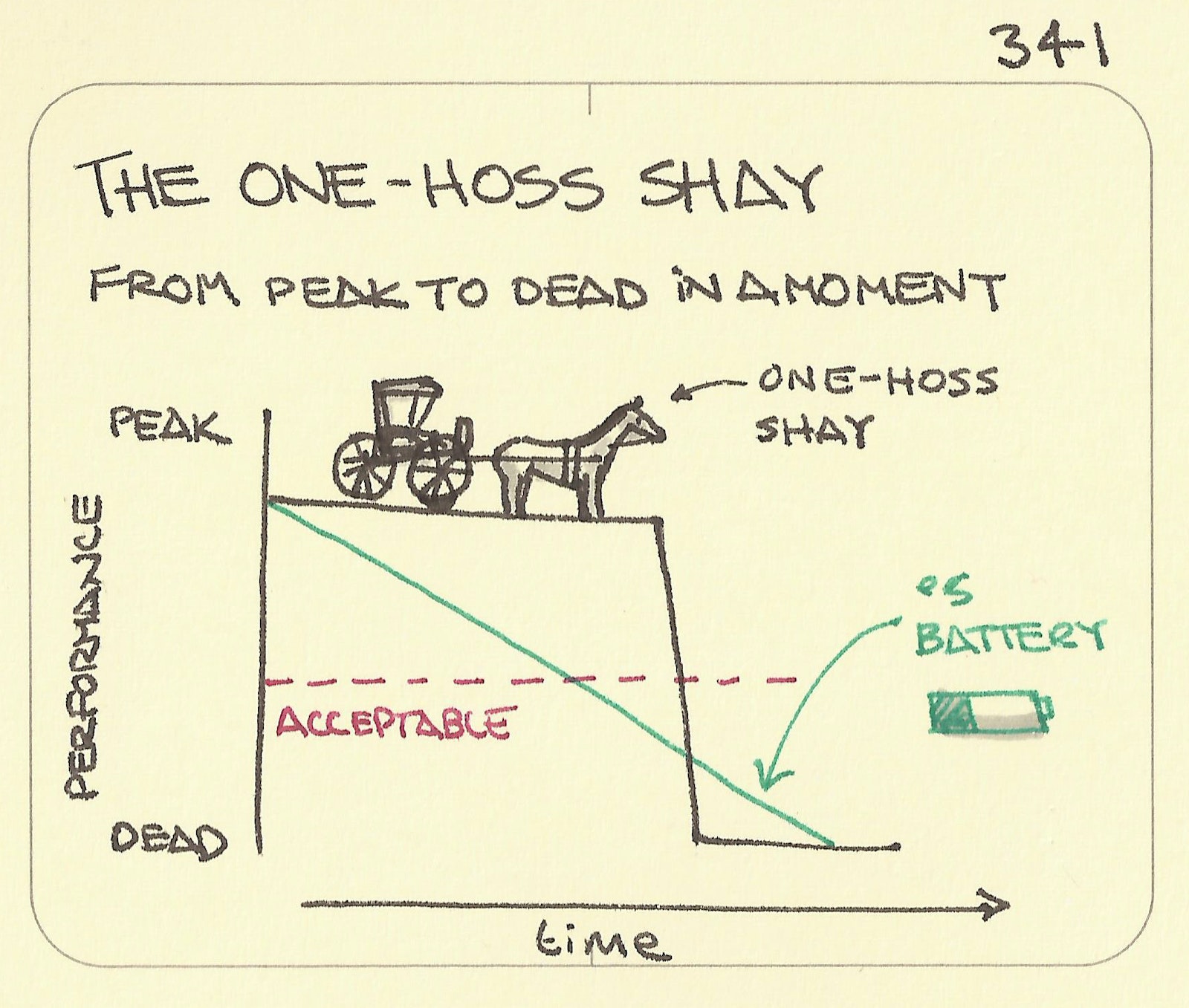 Refers to a poem about a cart that worked perfectly for years and then collapses without warning. Useful parallels in engineering and design. For example, torch lights would generally benefit from being more like the one-hoss shay. A bike light gets progressively worse as the batteries get weak, and cycling gets increasingly dangerous until you decide you can’t take it any more. Much better to have a light that stayed full power, then warned you before it died.

Have you heard of the wonderful one-hoss shay,

That was built in such a logical way

It ran a hundred years to a day,

I’ll tell you what happened without delay,

Scaring the parson into fits,

Frightening people out of their wits, —

Have you ever heard of that, I say?

Georgius Secundus was then alive, —

That was the year when Lisbon-town

Saw the earth open and gulp her down,

And Braddock’s army was done so brown,

Left without a scalp to its crown.

It was on the terrible Earthquake-day

That the Deacon finished the one-hoss shay.

Now in building of chaises, I tell you what,

There is always somewhere a weakest spot, —

In hub, tire, felloe, in spring or thill,

In panel, or crossbar, or floor, or sill,

Find it somewhere you must and will, —

Above or below, or within or without, —

And that’s the reason, beyond a doubt,

A chaise breaks down, but doesn’t wear out.

But the Deacon swore (as Deacons do,

He would build one shay to beat the taown

It should be so built that it couldn’ break daown:

So the Deacon inquired of the village folk

Where he could find the strongest oak,

That couldn’t be split nor bent nor broke, —

That was for spokes and floor and sills;

He sent for lancewood to make the thills;

The crossbars were ash, from the straightest trees,

The hubs of logs from the “Settler’s ellum,” —

Last of its timber, — they couldn’t sell 'em,

Never an axe had seen their chips,

And the wedges flew from between their lips,

Step and prop-iron, bolt and screw,

Spring, tire, axle, and linchpin too,

Steel of the finest, bright and blue;

Found in the pit when the tanner died.

That was the way he “put her through.”

Do! I tell you, I rather guess

She was a wonder, and nothing less!

Deacon and deaconess dropped away,

Children and grandchildren — where were they?

But there stood the stout old one-hoss shay

As fresh as on Lisbon-earthquake-day!

EIGHTEEN HUNDRED; — it came and found

The Deacon’s masterpiece strong and sound.

“Hahnsum kerridge” they called it then.

Running as usual; much the same.

Thirty and forty at last arrive,

And then come fifty, and FIFTY-FIVE.

Little of all we value here

Wakes on the morn of its hundreth year

Without both feeling and looking queer.

In fact, there’s nothing that keeps its youth,

So far as I know, but a tree and truth.

(This is a moral that runs at large;

FIRST OF NOVEMBER, — the Earthquake-day, —

There are traces of age in the one-hoss shay,

A general flavor of mild decay,

But nothing local, as one may say.

There couldn’t be, — for the Deacon’s art

That there wasn’t a chance for one to start.

For the wheels were just as strong as the thills,

And the floor was just as strong as the sills,

And the panels just as strong as the floor,

And the whipple-tree neither less nor more,

And the back crossbar as strong as the fore,

And spring and axle and hub encore.

And yet, as a whole, it is past a doubt

In another hour it will be worn out!

This morning the parson takes a drive.

Now, small boys, get out of the way!

Drawn by a rat-tailed, ewe-necked bay.

The parson was working his Sunday’s text, —

Had got to fifthly, and stopped perplexed

At what the — Moses — was coming next.

All at once the horse stood still,

Close by the meet'n’-house on the hill.

First a shiver, and then a thrill,

And the parson was sitting upon a rock,

At half past nine by the meet'n-house clock, —

Just the hour of the Earthquake shock!

What do you think the parson found,

When he got up and stared around?

The poor old chaise in a heap or mound,

As if it had been to the mill and ground!

You see, of course, if you’re not a dunce,

How it went to pieces all at once, —

All at once, and nothing first, —

Just as bubbles do when they burst.

End of the wonderful one-hoss shay.

Logic is logic. That’s all I say. 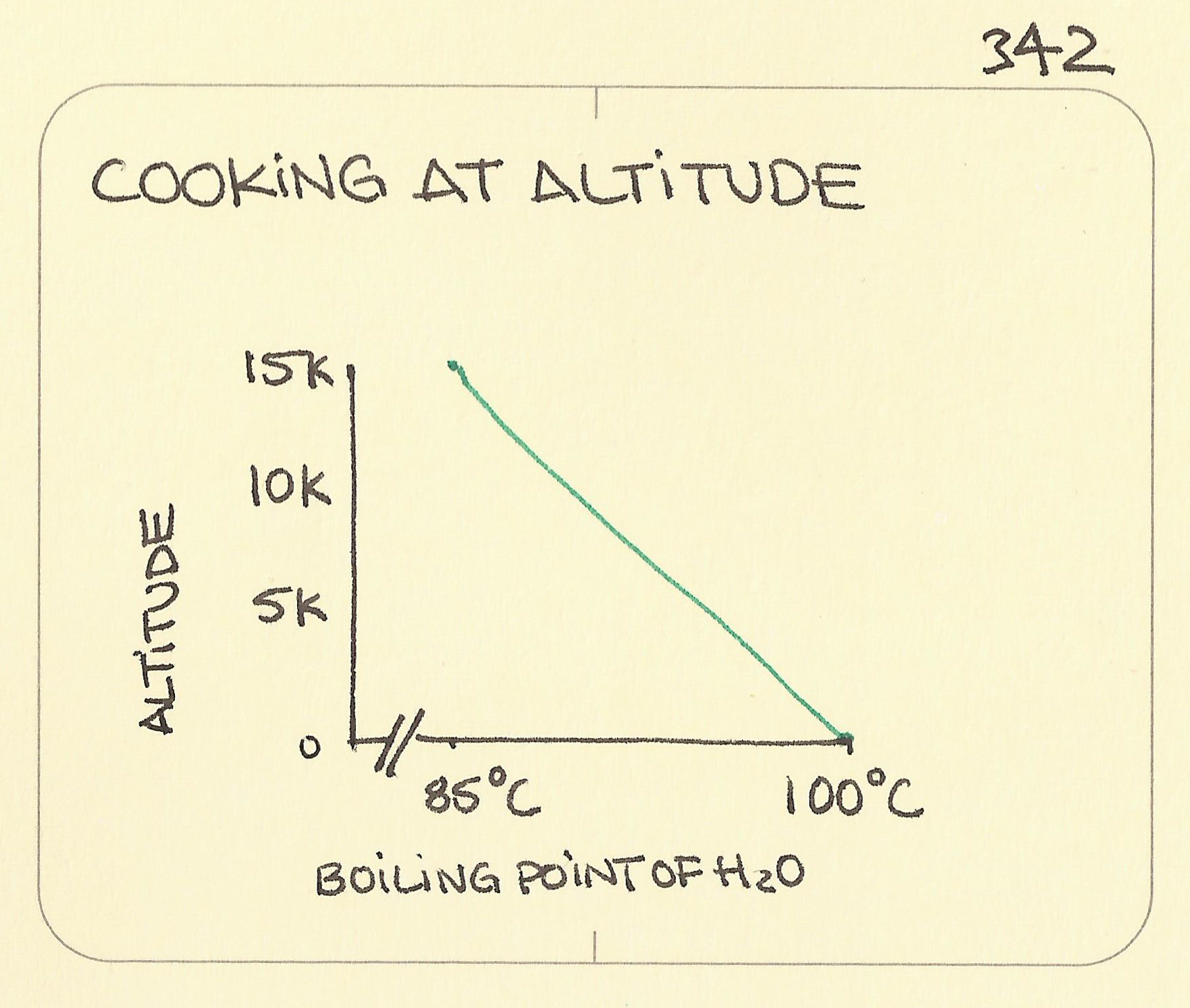 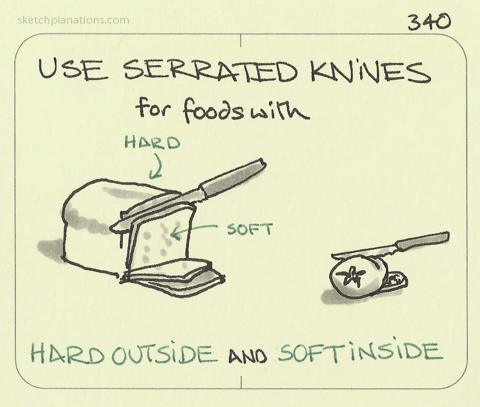